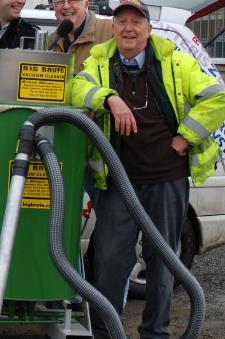 Mike founded Michael Williams Engineering Ltd in the early 1970s and invented the Big Brute Industrial Vacuums back in the 1980s which today are used in countries all over the world.  In the past few years in semi-retirement, Mike worked with us here at TransNorth to successfully launch his vacuums into the Canadian market.

He was very proud of his company and grateful to all the people who had helped make his ideas and visions a reality over the decades.

He leaves behind his wife, Anne, and two sons, John and James, who together will continue to run his company. He also had 2 grandchildren.

We extend our condolences to Michael’s family and all of our friends at MWE during this difficult time.

On August 31, 2016, the Turtle Island News (North America’s #1 weekly newspaper for native peoples) ran the following article about Sedore Stoves beside our Sedore advertisement.  We really appreciate the national coverage and I thought our website visitors might enjoy reading it too.
END_OF_DOCUMENT_TOKEN_TO_BE_REPLACED

Welcome to the new TransNorth website! We are pleased to offer you a fully integrated site to learn about us, get information about our products and make purchases. We hope you like it.
END_OF_DOCUMENT_TOKEN_TO_BE_REPLACED